STAY IN TOUCH WITH THE LATEST TRENDS IN DESIGN

The Innovation that matters: Sanitary Pads in India 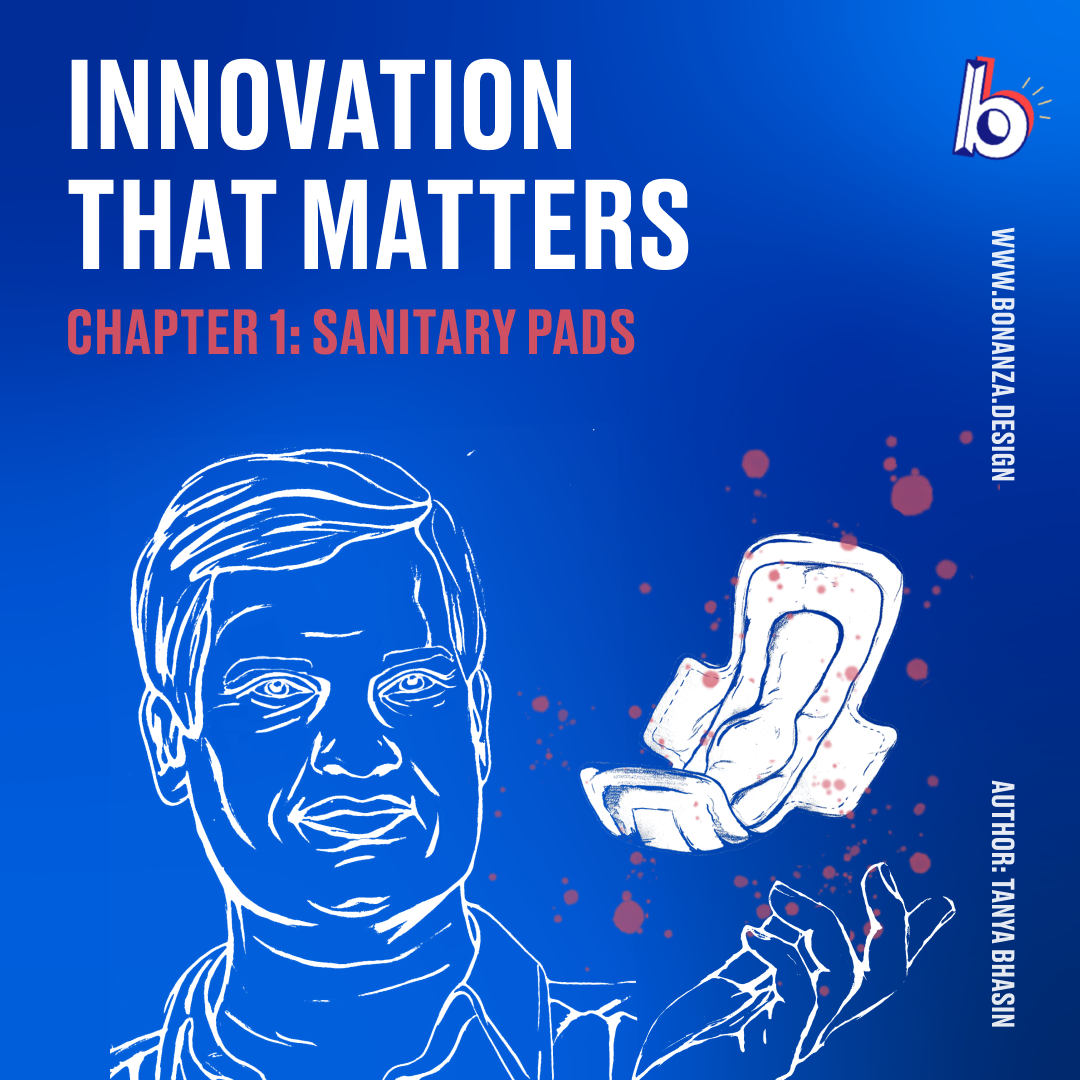 Innovation matters.  The right innovation can change the way we live our lives. There are countless products that we use every day that we neglect to know the great story behind its innovation.

Great innovative products come at a great price too. One of the notable innovation stories is the invention of affordable sanitary pads in India. Sanitary pads or napkins are commonly essential to women during the menstrual period. Without the sanitary napkins, imagine how difficult it would be for every woman in the world to move every time their period comes. Also, not everyone can afford it which puts more risk on women’s hygiene since they use old rags or banana leaves as their alternative.

But thanks to one husband who looked at how difficult it was for his wife to use old rags during her period and thought how he could make it easy for her.

In this article, we will look back on how one man changed the lives of many women today in India.

A Tale of Menstrual Hygiene 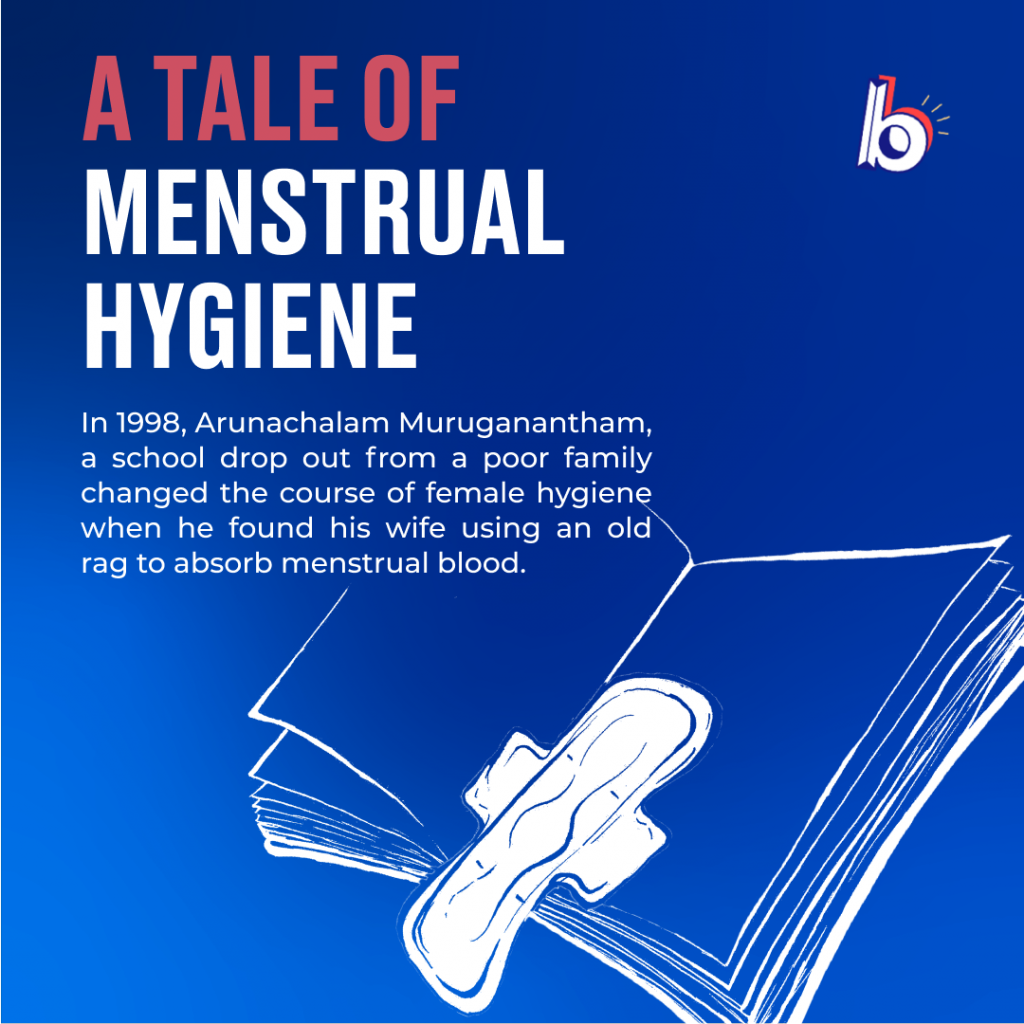 Arunachalam Muruganantham at a young age has been conscious every time his sister has a period. Most of the time he finds it unsettling seeing old rags with blood hidden especially when they are using one bathroom. But he never understood why and always thought it was unhygienic. When he got married to his wife Shanthi he noticed the same practice. Shanthi told Muruganantham that women menstruate and in the least developing country, they use rags to absorb the blood. Though his wife is aware that there are sanitary pads available in the market it was too expensive. But out of his curiosity and also as a gift to his wife he bought a pack of sanitary napkins to consist of 8 pads. That cost him 20 rupees equal to 3 days of food groceries. 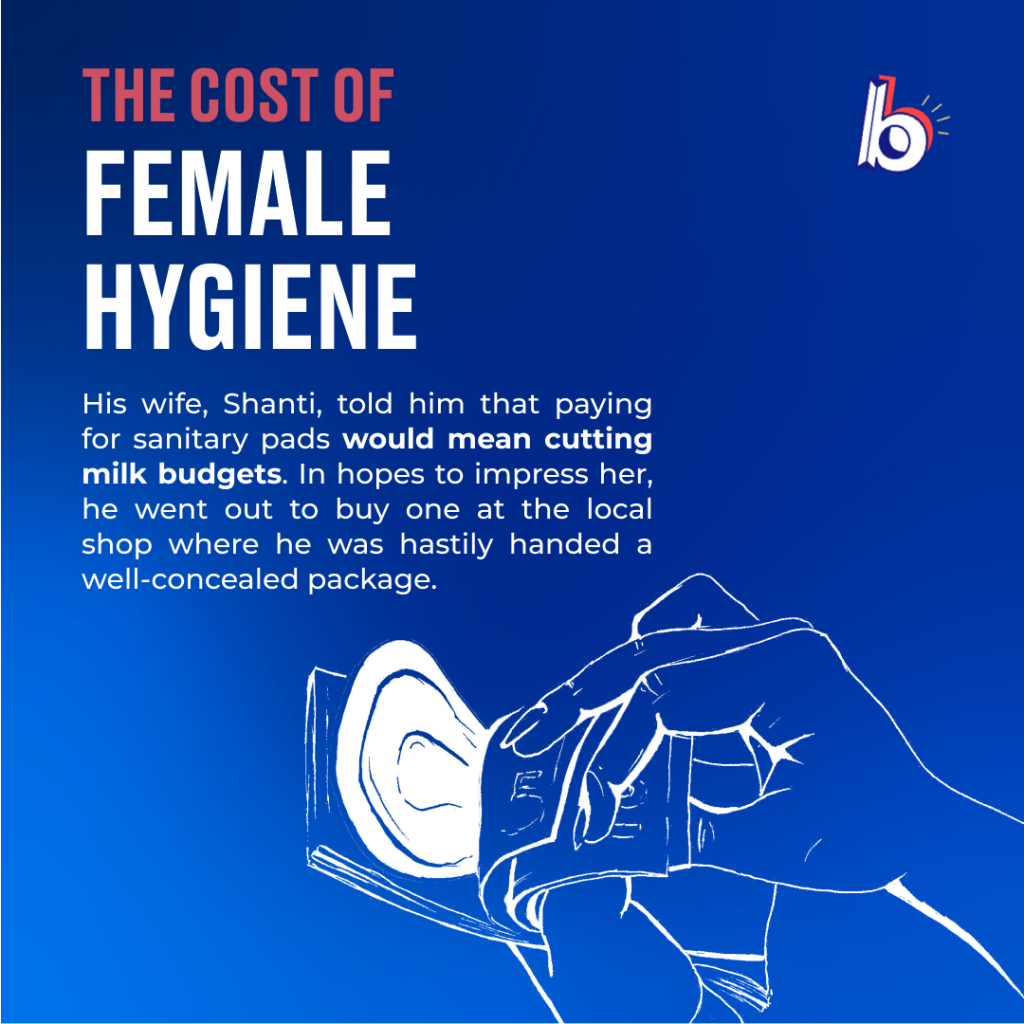 When he got home, he took one of the pads and tore it open. He was expecting to see something interesting inside the pad, but the innards seemed to be nothing but compressed cotton. He wondered why 10 grams of cotton — costing barely a 10th of a rupee — was being sold for a price that was beyond the reach of 90 percent of Indian women. “I am the son of a hand-loom weaver, I have a connection with yarn. I thought, “Why not try to make an affordable sanitary pad for my wife?” 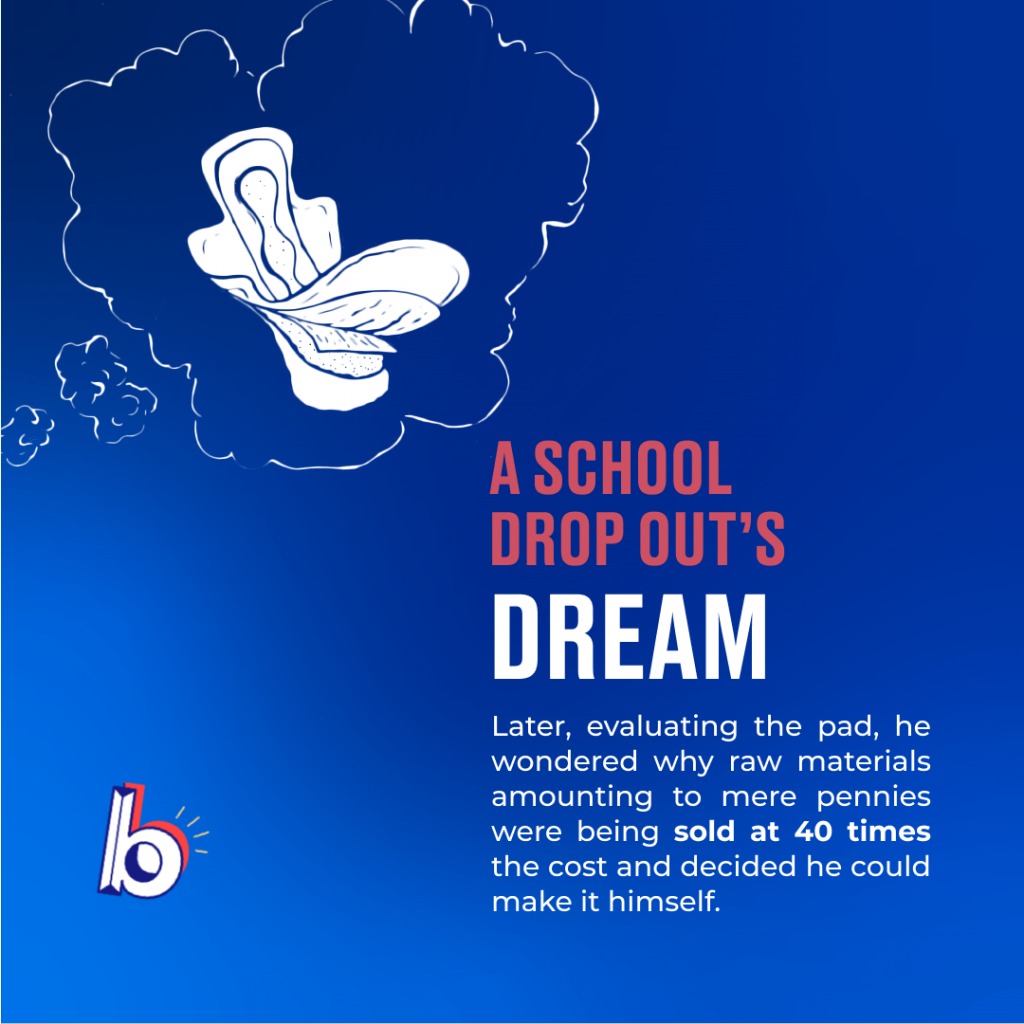 The next day he went out to buy the softest cotton, immediately sewed up some in a piece of cloth, and asked his wife to test it. That was his first prototype. But it was no good, his wife preferred to use the rags instead. He also had his sister try his pads but they responded the same, it was no good to them too.

He later asked a group of medical students to try out his pads but they were too shy. Back in the days in  India’s traditional society, women who have menstruation are fighting for their rights to enter the worship house. It was a taboo, so no one talked about it and women often hid their period. 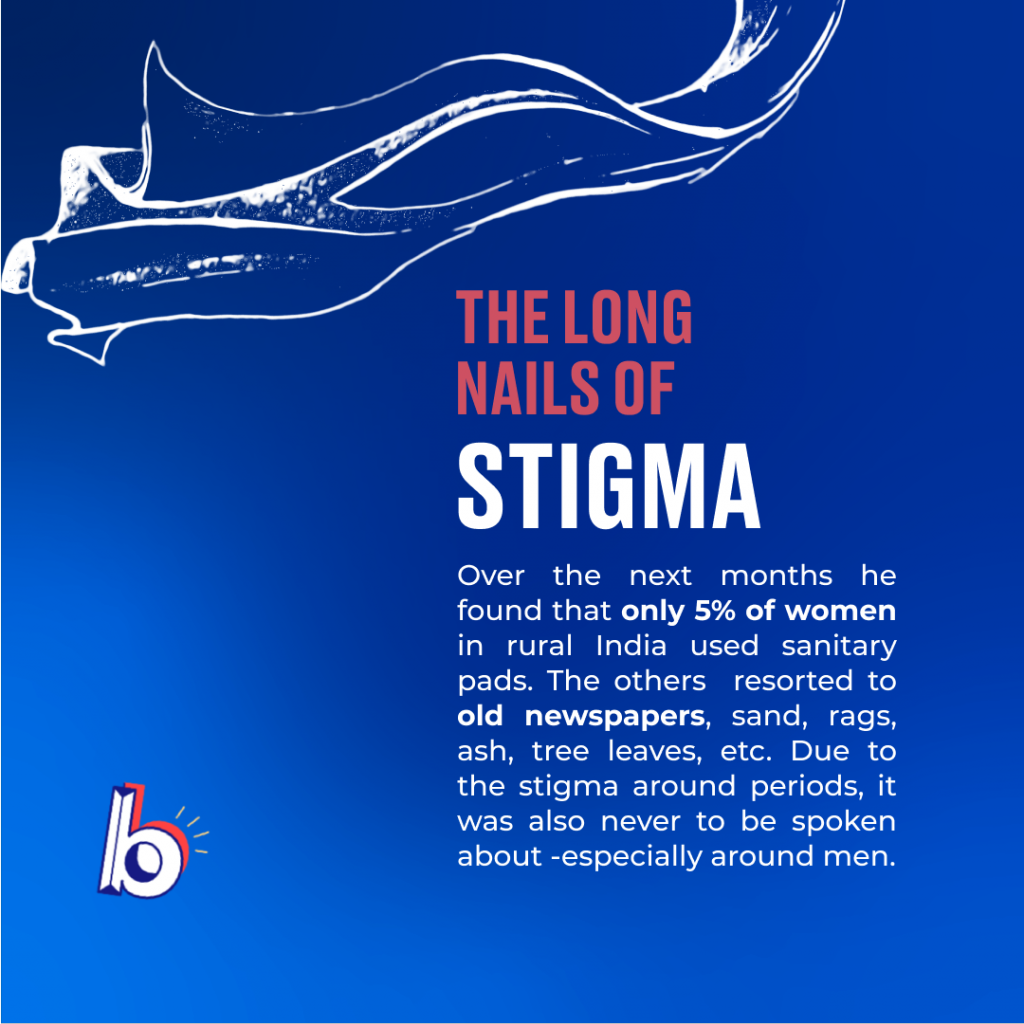 So out of desperation, he decided to test it himself. To replicate menstrual bleeding, he tied an old soccer-ball bladder filled with goat blood around his hip. Then a tube running from the bladder’s opening to his underpants. A friend who worked at a hospital supplied an anticoagulant. Every time he pressed the bladder as he walked and bicycled around the streets it squirted blood. Only then he realized the difficulty of the women around him and felt deep sympathy for them every time they have their period. 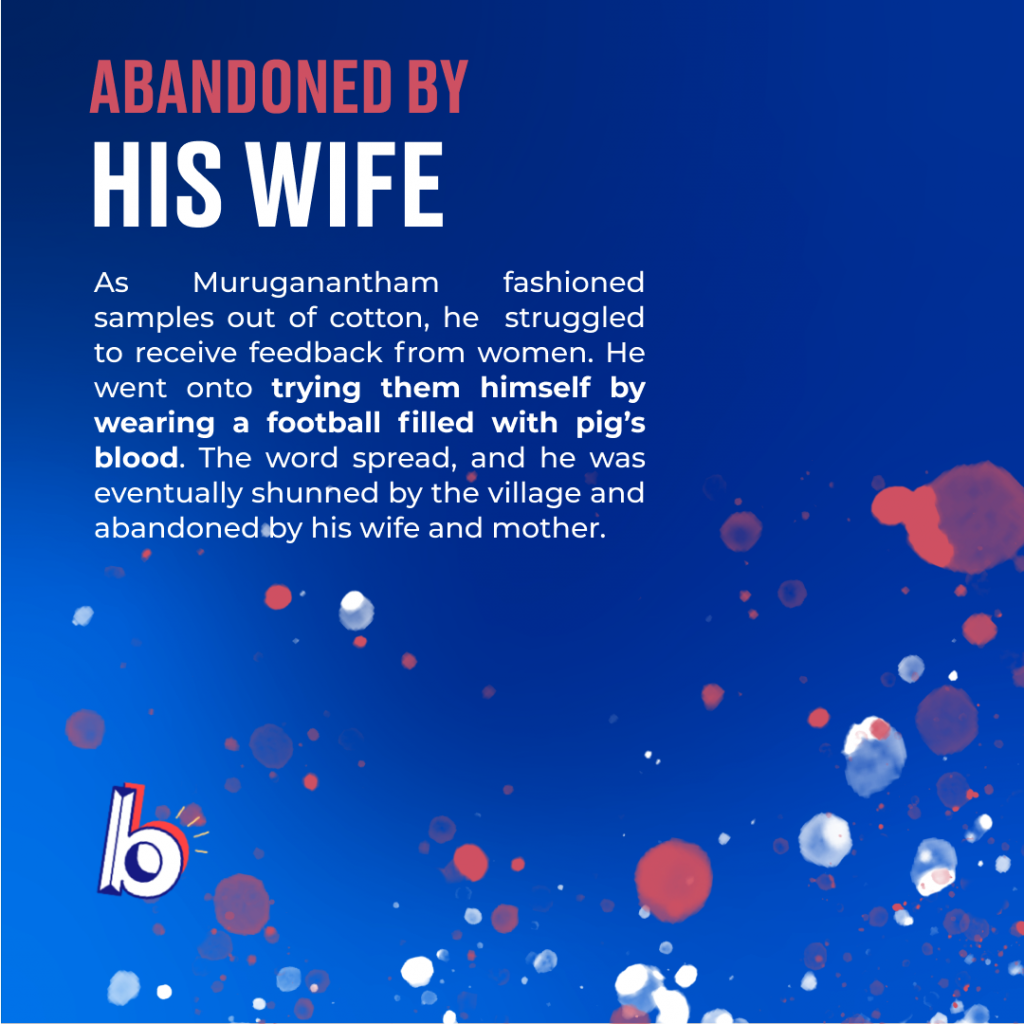 Shanthi heard about the rumors that Muruganantham is going out with medical college girls. He explained that they are his other test subjects which made things worse. He thought she would understand his ambitions but Shanthi left and later sent the divorce papers. His heart may be broken but not his dreams. This even pushed him to continue making affordable sanitary napkins to all women.

So to continue his journey, he went to the National Innovation Foundation where he exhibits his sanitary pads. The exhibit was organized by one of the known researchers in India Anil Gupta. Gupta recognized the everyday struggle for survival that ordinary Indians endured especially those in rural villages. To Gupta that was a powerful driver of creativity and innovation. Gupta taught him everything that he needed and drove him to the right direction of innovating his sanitary pads.

So Muruganantham focused on the materials, he was determined that the cotton for the napkins are a different variety. He researched and looked for different kinds of cotton. He called various American manufacturers but he ended up mazed around the voice prompts. When he finally found some helpful representatives to answer his inquiry, they were bewildered.

Muruganantham spent the next four and a half years developing a cheaper alternative. Turning his home into a workshop and laboratory. To make things even harder for him, the villagers believed that he had become possessed by demons and needed an exorcism. So he had to move out of his house into a room he rented in downtown with five other tenants. To finance his work he was doing roofing jobs besides his welding work for extra income. He found the trial and error of the research process thrilling.

I may fail today, but if I have another idea tomorrow, maybe it will work, This is what I enjoyed.

In the end, Muruganantham designed what was a large meat grinder to break compacted cellulose into clouds of fibrous strands.  He made another device — a kind of drill press — to compress the fluffy material to the thickness of a pad. 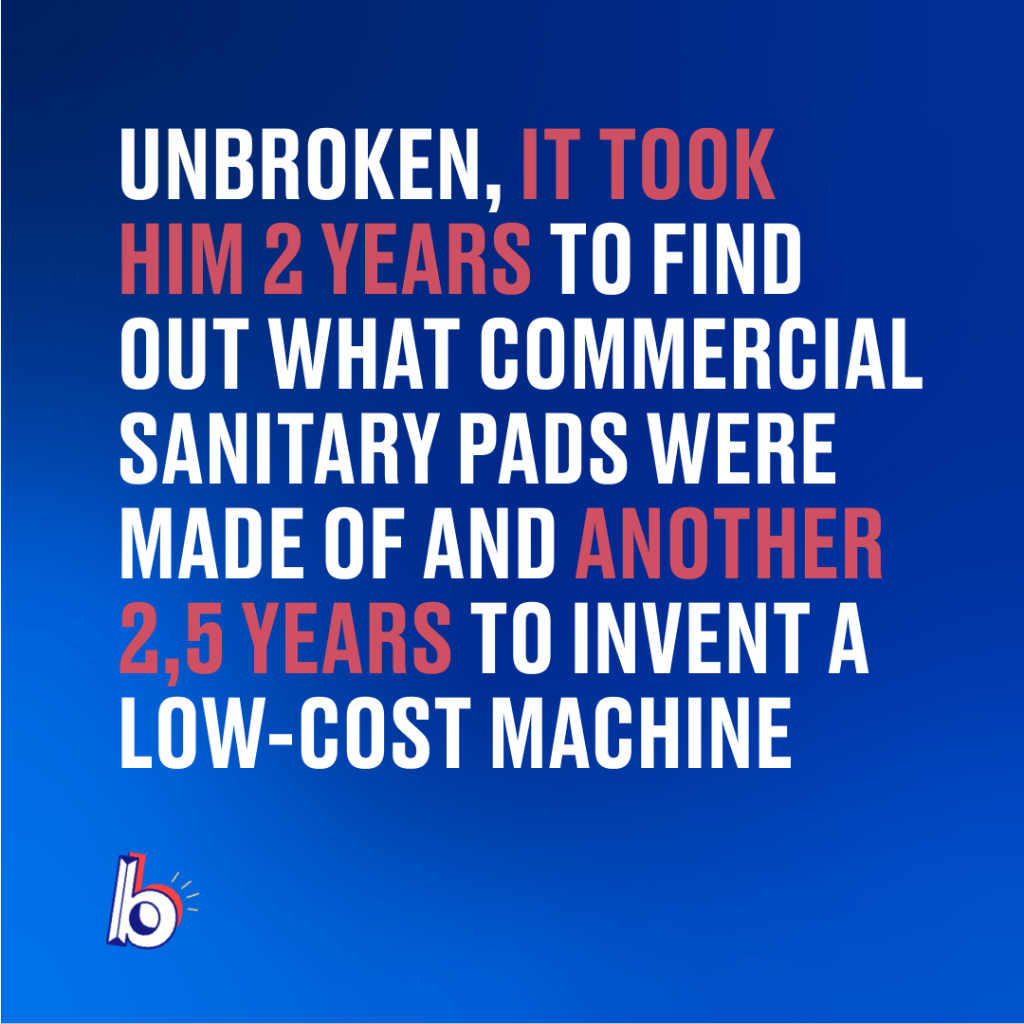 Muruganantham made another trip to the medical college, only this time with a new kind of pad. Days later, when he went back to the campus to ask for feedback, he saw one of the women volunteers coming toward him, riding a scooter. She stopped and smiled. “When I use your napkin,” she said, “I forget that I’m having my period.” Muruganantham lit up. “That’s when I felt I had achieved what I had set out to do,” he said.

His first breakthrough had taken him six years.

After his creation won a local innovation contest and where he got interviewed and featured. The potential market for Muruganantham’s invention was vast: Less than 10 percent of women in India were users of sanitary pads. But he wasn’t interested in simply selling a product. Nor was his method suited to high-volume production. It was the opposite of the automated assembly-line manufacturing of large corporations. Muruganantham saw a different possibility. Helping locals in rural and urban communities make and distribute the pads themselves.

For a field trial of the concept, in 2005 he took his equipment to a remote district in Bihar, one of India’s least-developed states. But when he talked to local men about what he wanted to do, he came perilously close to being beaten up. He learned that he had to ask permission from fathers and husbands and brothers before pitching the idea to women. It took months, and many visits, to get local women to start making the pads as he’d envisioned, using machinery he produced. 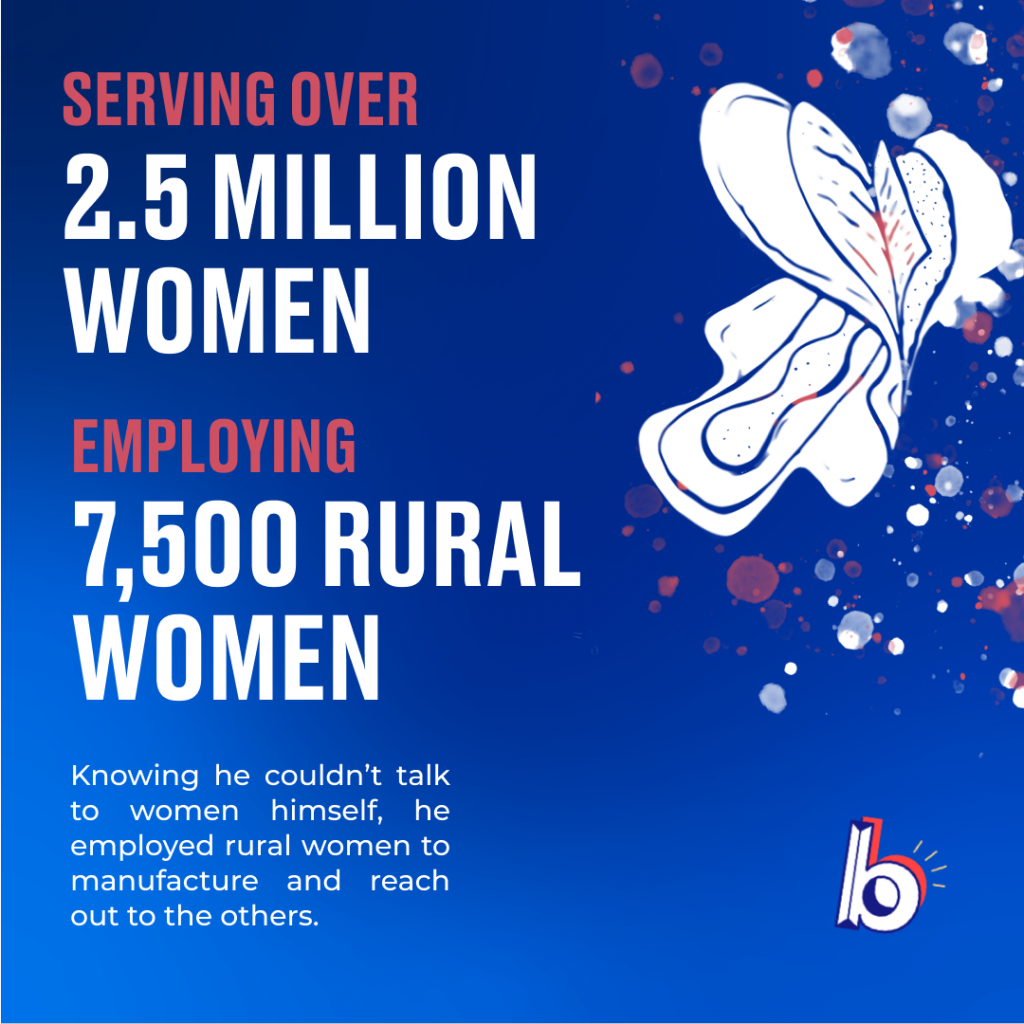 The factory where Muruganantham fabricates his equipment is low-tech, housed alongside similar units in an industrial compound off a dirt road. The manufacturing took place in an air-conditioned room that I had to take my shoes off before entering. A rule enforced by employees to keep the floors from getting dusty. First, a woman broke off a few pieces of compacted cellulose and put them in a grinder for two minutes. Next, she put about 10 grams of the resulting fluff into three rectangular compartments inside a metal frame. She placed the frame under a pneumatic press with three metal plates that came down. At the flick of a switch, to squish the fluffy cellulose into a half-inch-thick layer. Another worker carefully used a brush to glue a thin plastic film on the bottom of the three rectangles. A third woman wrapped each of them in a gauzy cloth, and then closed up the sides with a heat-sealing machine. The entire process took about 10 minutes.

The pads couldn’t have been more basic. Offered a stark contrast, in appearance and sophistication. To the winged, ultrathin, superabsorbent products sold by multinationals. Not to mention the latest arrivals in feminine hygiene — the all-absorbing, no-hassle

Affordable sanitary pads available to everyone 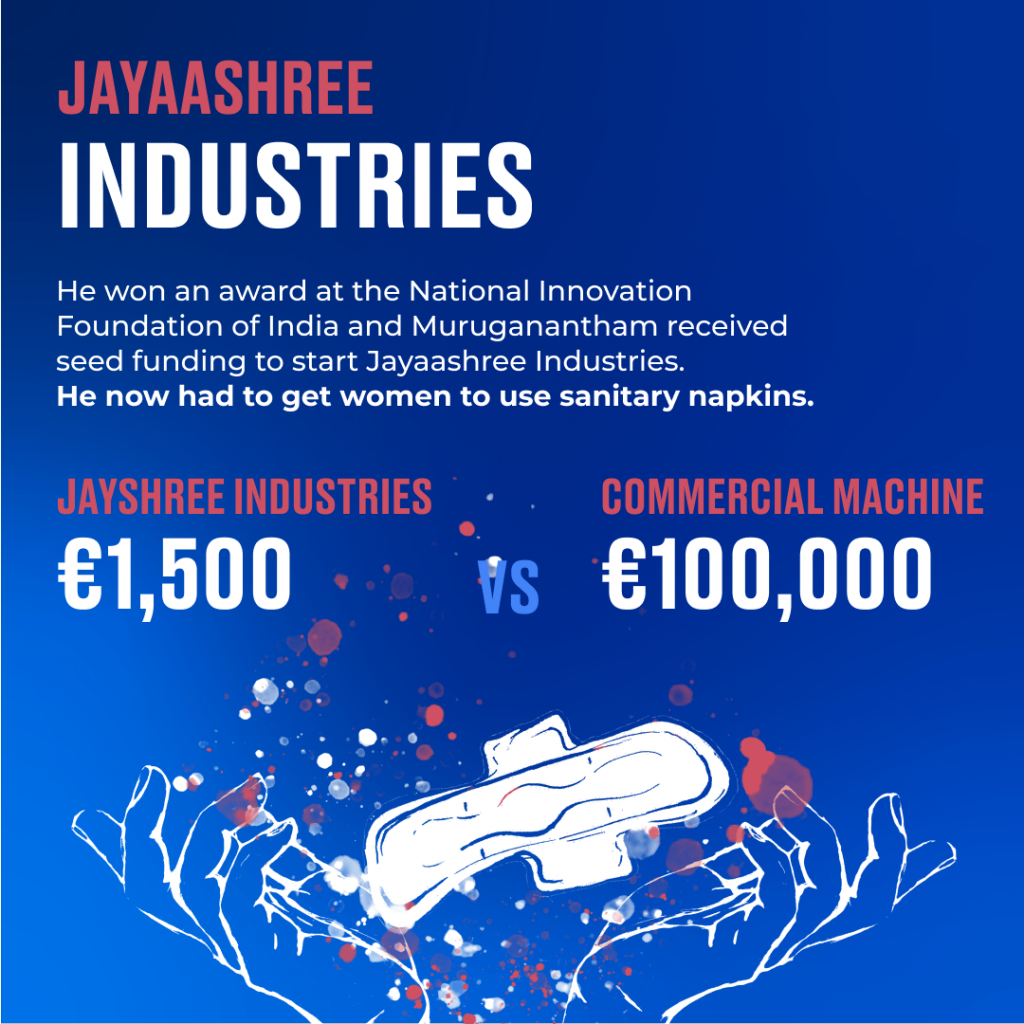 Muruganantham won another award at the National Innovation Foundation of India. Where he received seed funding with Jayashree Industries. Which makes his sanitary pads more accessible and available to everyone.

The diffusion of Muruganantham’s innovation across parts of India and elsewhere has earned him global attention.

“Women’s ability to manage their periods with dignity through access to affordable or free products is a human right,” says Megan Mukuria

Founder of the Nairobi-based ZanaAfrica Group, a company that makes and distributes low-cost pads.  Importantly, all these innovations recognize that to fuel the “Female Sanitary Revolution”. It is necessary to educate and empower women. Whether it be by training unemployed women to make menstrual kits or by going a step further. Setting up women-led micro-enterprises that market, manufacture, and sell sanitary napkins. These organizations are changing the perception that women should be ashamed of menstruation.

Despite the challenges, painful separations, and countless failures, Muruganantham surpassed it all. Now through his innovations, the lives of many Indian women drastically changed. He only aimed to improve the hygiene and comfort of his beloved but he ended up changing everyone else’s too.

We hope Muruganantham’s story inspires everyone that great innovation requires time and determination.

Let us know how you like the story or if you have stories to share, message us at contact@bonanza.design.

Let's get to work